A worldwide blueprint for dementia research 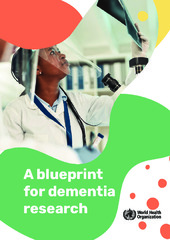 The findings from WHO’s ‘Global status report on the public health response to dementia’, released in 2021, found that only a quarter of countries worldwide have a national policy, strategy or plan for supporting people with dementia and their families and targets set by the global dementia action plan are unlikely to be realised by 2025. At the same time, the number of people living with dementia is growing, with WHO estimating that more than 78 million people worldwide will be living with dementia by 2030 and estimated to rise to 139 million by 2050.

Dementia research is an integral part of the global response to the dementia epidemic. The World Health Organisation has developed and launched a Dementia Research Blueprint which aims to provide a clear direction and coordinated efforts for dementia research globally and to stimulate new initiatives. The Blueprint summarizes the current state of dementia research across six broad research themes, identifies existing research gaps, and emphasises that advances in research across the dementia spectrum, incorporating diagnostics and therapeutics, can only be fully accomplished if appropriate and sustainable funding is allocated to address those gaps. With major input from researchers at the Centre for Health Brain Ageing (CHeBA), led by Scientia Professor and ADNeT Deputy Director Perminder Sachdev, the Dementia Research Blueprint  aims to make dementia support the realization of a world in which research on dementia is a priority, so that innovation is accelerated, and efficient solutions are found for people living with dementia, their carers and those at risk of dementia in all its forms.

The Blueprint urgently calls on national and international agencies to inform funding streams in order to address the long-standing barriers in dementia research and achieve a vision of rapid innovation and transformative change in early dementia diagnosis and treatment worldwide.